The Moments That Define You

I first watched footy (Aussie Rules football) back in 2008. I was astounded that such a sport existed, as it just seemed to combine all the best elements from basketball and football, the two sports I've enjoyed watching the most - the continuous play that you get with basketball, with the monumental occasion when scores happen.

Andrew showed me a game then, and said I should choose a side, though he really wanted me to go for the Crows. They had colors that were closer to rainbow, so I did barrack for them in that game, and I chose them as my team.

Last year, they were horrid, plagued by injury, a coach who had lost the plot, and an overall just loss of belief in themselves. This year, won the pre-season competition, and I believed all year long - maybe they could do it. Then they came out and just were not ready for finals the first week. Just did not even seem to show up to play. Hugely disappointing game, that was. Showed up the next week to see them throw up the same kind of performance for the first quarter or so, and then finally start to hit their straps, and crazy excitement as Tex dragged them back into it, and over the line.

Then today, playing to get into the grand final. Played their hearts out. Watched Dangerfield run for his life, starting out the quarter by earning two times as many possessions as any other player on the ground. And then the game slipped away - they ended up losing by less than one goal.

I watched the players afterwards, saw how shattered they were - because in the end they threw everything at it, and it just didn't fall their way. But this single moment has the power to define this team. It strips it down to what really is most important to them. Is it aching muscles from training? Way back in February? Or will they push themselves again. Or is being in a grand final the most important thing as a club? The moments are defining because they are rare, and when they come along, you finally see with clarity what really matters to you.

It's made me pause a bit, to think about those moments that have defined me. My single biggest moment was when Janardan left me. I'd been manipulated and in a cloud of emotional abuse, and started to actually see my own value again. And it changed everything, because the next conversation we had, I'd planned to tell him he could come back and stay until he figured out what he wanted to do with his life, but I decided to value myself, to stand up for myself, and I told him that if he didn't want a relationship, he wasn't welcome to come back. Then when he didn't file for divorce, I filed for it myself, and began to feel the catharsis of shedding the dead weight in my life, and to symbolically free myself from that which I had let myself be mentally bound by.

I reached a point in this past year, through the unemployment and hardships Andrew and I have been through, a point where I was going to defy the odds, instead of let the odds define me. I set myself a target of applying for 100 jobs a week until I got a job. I got a job within 2 weeks. The funny thing being over the previous year and a half, I had applied for well over 1000 jobs. I'd been defeated, and I decided I wasn't going to be defeated any more. I was just going to make it happen by sheer force of will, whatever it took.

But I always remember Janardan leaving me, because then I knew I had a choice. I'd always thought I would completely crumble if something like that happened, that I would fold, and my life would fall apart. When the moment came, I decided for myself I wasn't going to let that happen. And it spurred the single greatest period of growth in my life, partially because I had been so lacking in the previous 5 years. My life now is not anything I could have even dreamed of right before then. It was my personal renaissance. Born again, in myself.

These are the moments that define us, the tragedy that can fuel us to greater heights. Part of it is looking at yourself and seeing that you are better than that. If you decide you are, then you can be. And that is what I hope the Crows are deciding right now.

The world is magical

Walk down and back across
Rock to rock, rock to rock
Find a fiberglass cylinder
Stop to read a story
Sun streaming down on the rocks
Green leaves making green shadows on the walls

Climb back down, and back  up a hill
Beautiful fields
What's at the top of that hill?
And that one?
Get to the top and see out to the vast beyond
Blue ocean with sunlight bright on the surface
Turn around and see dark storm clouds against the brightly lit meadows

Rainbow brightens
It starts to rain

I am filled
Such beauty
I overflow with emotion
First tears, lots of tears
So, so beautiful
Then running and sighs
Loud sighs of happiness 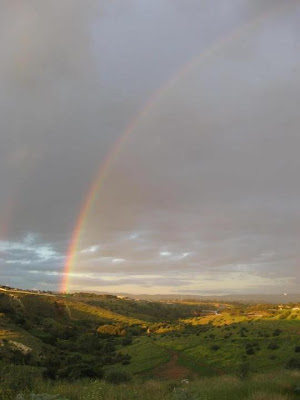 The world is magical
Posted by Jennie at 4:16 AM 2 comments:

Jennie
I love being alive!

Things I Have Stored for the Winter from this Summer